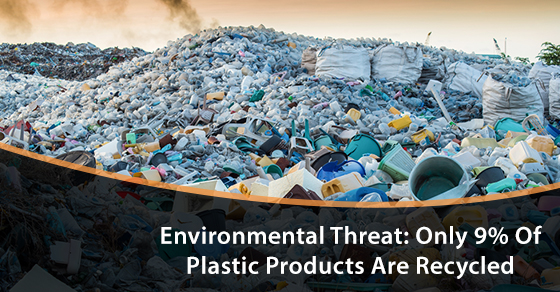 Plastic is a fairly new material considering that its mass production started in the 1950s. But its versatility has accelerated its production to a whooping 8.3 billion metric tonnes to date. Unfortunately, only a small percentage of plastic products are recyclable, with the vast majority ending up in garbage disposal bins as trash, from where it’s burned or put in landfills.

Considering that plastic takes over 4 centuries to degrade, and only 12% of the waste has been incinerated, the remaining 88% of plastic waste still exists, and it continues to build up. It is no wonder so much plastic ends up in the oceans where it harms marine animals, fish, and birds. If nothing is done, scientists expect that there will be more plastic in the seas than fish, in terms of mass, by mid-century.

According to the study published in the peer-reviewed journal Science Advances, a massive 6.3 billion metric tonnes out of the 8.3 billion metric tonnes of plastic ever produced globally has become waste. Only 9% of the plastic waste is recycled, 12% is incinerated, while 79% ends up in landfills or in the natural environment as litter, with the sea as its final destination.

The production of plastic products has doubled after every 15 years, yet the implications of plastic waste on the environment have only recently become apparent.

Most consumers are becoming increasingly conscious of the environment, and would be willing to recycle plastic if such initiatives were available. For now, using non-disposable items and discarding plastic waste in the right garbage disposal bins for collection and proper disposal can make a difference.