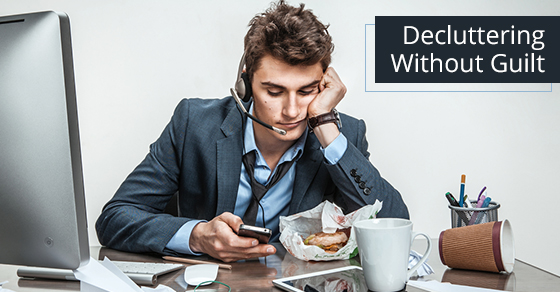 You look around your home and breathe a heavy sigh. You have so many things, and your home is starting to feel overwhelming. Could this clutter be linked to your emotions? Often guilt plays a large part in why we don’t and won’t let go of many material things in our lives.

It Has Sentimental Value

One rationale for keeping items is that they hold some sentiment or memory. If there are one or two things that truly have sentimental value, then they are not considered clutter. But when you need to get rid of some items and you’re using sentimental value as an excuse not to, that’s when there is a problem. If you haven’t been displaying the item proudly in a very special place, and you pay little to no attention to it, it’s not as sentimental as you think. These things should be donated, go into recycling containers, or if in really unsalvageable shape, go into waste containers.

It’s common not to want to declutter by getting rid of something someone gave you as a gift. However, if you’re not using it, maybe someone else could. Of course you don’t want to hurt anyone’s feelings, but what if all those things together are causing you angst because your home is so cluttered? The thing is to separate your feelings about the gift giver from the object itself. That way, it will be easier to get rid of.

The Items Symbolize Something

Perhaps there are wishes and dreams tied to some of these things, and letting go of them is painful. For instance, perhaps you’ve always wanted to open your own craft store, but now your home is overflowing with all kinds of craft supplies you haven’t used in years.

If you pause for a while and come to realize that this is why you’re hanging on to these items, you’ll be able to make a real breakthrough and move forward by getting rid of them, even if it’s a little at a time—some for sale, some for donation or recycling, and others for waste containers.

But I Paid Good Money …

Impulse buying usually involves a considerable layout of cash, and you may be feeling guilty about disposing of things you paid good money for. Keeping these things, however, won’t bring the money back. Acceptance will let you move on, and actually allow you to part with these thing without guilt.