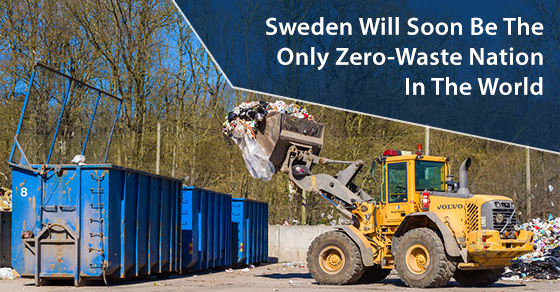 In the recent Country Sustainability Ranking study, Sweden was recognised as the Most Sustainable Country in the World, emerging ahead of 59 other countries that were assessed on a wide range of Environmental, Social, and Governance (ESG) components.

Although this ranking analyses different elements, one major distinction between Sweden and other countries is its combination of high ambition levels, citizen engagement, and international solidarity.

In 1975, Sweden recycled about 38% of its household waste through strict waste disposal rules. Today, the country has made significant progress towards its ‘zero waste’ goal by 2020, largely to the ingrained ‘waste hierarchy’.

Before the WTE process starts, homes and businesses filter and separate their waste into recyclable material and hazardous waste. Afterwards, the waste is sent to the respective waste management systems, like recycling, incinerators, or landfills.

The WTE plants have huge ovens that are designed to use garbage as fuel to generate heat, which is then distributed to consumers’ homes via a network of underground pipes. The waste that is recycled is converted into district hearing, biogas, electricity, and biofertilizer. By contrast, most countries rely on gas and other fossil fuels to generate their heat and electricity.

The problem with sending waste to landfills is that it begins to leak greenhouse gases like methane, which is toxic to the environment. But this is not a problem for Sweden. Instead, the country has a shortage of local garbage, so much so that Sweden imports the trash that other countries are trying to dispose to meet the needs of its heating plants. This amount is gradually increasing, from 550,000 tonnes of garbage in 2010 to 800,000 tonnes in 2014.

The waste is only ready for WTE after all recyclable items have been removed. However, this system is pricey, and still results in the release of environmental pollutants. For instance, waste producers are required by law to handle all expenses related to waste collection, recycling, and disposal.

That said, Sweden’s waste management system is still a global leader. It recovers more energy per tonne of waste compared to any other nation, and the system is constantly evolving, thanks to new technological inventions that help to reduce the environmental impact of WTE.